The students studying in Anna university were shocked by a news few day back. 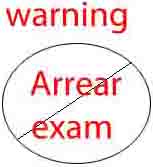 Anna University Chennai announced that ” the students who have joined engineering before 2010 and are having arrears will not be allowed to write exam”. The University also stated that the students will not be getting degree. As they have exceeded the time period of seven year to complete the degree. Anna University says that there are approximately forty thousand students. Who are yet to finish degree who have joined engineering before 2010.

The University says that it is difficult to conduct arrear exam as it is colliding with the regular exam. And these examination are consuming longer time period that it was affecting the academic and vacation time for regular students. Therefore they came with this idea.

Anna University Chennai announced November / December Exam time table for the engineering students but they did not publish anything about the arrear exam.

After hearing this news all the arrear students condemned as it was a sudden rule and no one accepted. As this may affect them from getting the engineering degree. Which will affect them in many ways as their money will be wasted.

Due to the chaos among the arrear students so the government asks the minister of higher education Anbalagan. On Wednesday minister says that they will allow the students to write the arrear exam for one more year or two semester. Which will be considered as one more chance or may be the last chance for the students joined before 2010. The university also asks the students to use this opportunity to clear all their arrear subjects as it will not extend time anymore after this.

Arrear exam will be held around Feb 2018 and Aug 2018 as a special case says the minister.

Anna University states that the arrear exam will be conducted on 1 centre per every district. And the schedule for the examination, registration of subject and fees payment will be announced in later dates.

A professor at Anna university advice the arrear students to start preparing for the exam way before the examination as it may be their last hope to complete the engineering degree.  He also told that the students mainly suffer from lack of books and notes to prepare for the exam.